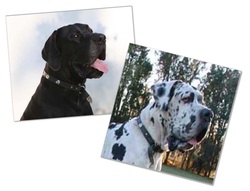 If you're looking for facts about Great Danes this introduction page is probably the best place to start. These dogs are giants, but extremely gentle and while they are very popular as show dogs, they also make outstanding family pets.

(Of course, they think they're human and if you don't give them the attention they need you end up with 30 IBs of dog head in your face, but who could resist that?)

Cuteness and levity aside, anyone considering having one in their lives needs to research the facts about Great Danes first because it really is a unique dog commitment.

Great Dane Temperament Despite its overwhelming size, the Great Dane is a gentle, loving dog that is dependable and friendly. This breed is usually good with children, though smaller children may be overpowered by the large dog’s affectionate approach. While the Great Dane is powerful, it is sensitive and quite responsive to training. Supervision is recommended around other dogs and pets, although this breed is generally friendly with both. Obedience training is suggested from an early age so this large dog will be more manageable when it’s fully grown. At times, the Great Dane may be aggressive with other dogs, especially those of the same sex. This breed should be considered as part of the family and kept indoors – keeping in mind that it requires space to be able to stretch out its long legs and large body. It should not be kenneled. It can be an enjoyable family companion and watchdog.

The Great Dane dog has been in Europe at least for the last 400 years and most believe was developed as a cross between a mastiff and a wolfhound. The history of the Great Dane probably goes back further than that, but even if that is a bit murky, what is not is that this dog has nothing to do with Denmark! The name comes from the french naturalist, Compte de Buffon who described the breed as the "grande Denois". He chose that label only because he was in Denmark the first time he saw one, and for some reason now lost to history, this was the name that "stuck" in English. In any event, the Dane was initially bred by Germans as a boar hunter and later, as a guard dog. This is the magnificant animal we see today.

The Great Dane is not the heaviest of dogs -mastiffs are generally heavier. And even though the tallest dog on record is a Great Dane named Gibson (who measured 42.2 inches at the shoulder and is pictured here towering 7 feet when standing on his hind legs), in general terms, wolf hounds are usually taller. But Danes have a very distinctive anatomy and it is a wonderful blend of size, muscle and bearing that make the Great Dane the "dog of dogs".

The average life span is seven to ten years, although it is not unheard of to go to twelve. The male grows to between 32 and 40 inches high at the shoulders, while the females are a bit smaller at 28 to 34. Males reach an average of 160 Ibs (73kg) and the females 135 Ibs (61kg). Of course, there are Danes that push 200 IbS (91kg) and in general, the European breeds are heavier than the North American. But even if you are dealing with only 135 Ibs of canine - that's still a lot of dog!

Great Danes are people dogs. They don't do well if left outside or if they aren't an integral part of their human's lives. They are among the most loyal of dog breeds and absolutely adore their humans. And all they want -need- in return, is to be loved back.

In researching the literature to put some of these facts about Great Danes together, we see that some Great Dane "experts" classify these dogs as extremely intelligent.

Any collection of facts about Great Danes wouldn't be complete without a comment about their leaning. They aren't content to just stand beside you. For some reason they like to make contact with their body and lean. They use people, the way people use walls! If you move back a step, they are likely to move right with you! Not much of a problem for most adults, but it is a consideration for young children who can be inadvertently knocked down.

Another characteristic that needs watching is the Dane tail. Great Danes get excited at the drop of a pin and the tail turns into a whip. Given the height of these dogs, lightning reflex -or a good cup - is a requirement in keeping the males of the household well protected!

Danes are very malleable meaning the way they are raised affects their behavior. If you want a loving animal that behaves,love it and train it. Danes that are not shown love and spend most of their lives tied up in a yard are at risk to develop significant behavioral problems.

There are Great Dane clubs all over Europe and North America. Great Dane Rescue organizations are also numerous and for good reason. There are too many stories of people not researching info about Great Danes before bringing a puppy home, only to discover after the fact that these dogs are unique. It costs money to feed them properly. Vet bills are more expensive for giant breeds. In many cases, people are scared away because the cute 25 IB puppy they bought grows into something they don't want to handle. Hundreds of Danes end up in rescue every year.

So, you need to ask yourself, are Great Danes right for you? They are way more expensive than other breeds. You can't just skip puppy training and basic obedience training. Giant dogs need to be controlled and they need to behave. And they only share our lives for an average of seven to ten years, so goodbys come far sooner than you want.

But, if you appreciate the regal bearing of this animal. If you want a beautiful dog that will absolutely depend on you and adore you. If you want a dog that will turn heads wherever you go -both within the dog world and on the street. And if you can imagine how indescribably rewarding sharing life with one of these animals can be, then maybe Dane ownership should be part of your life. Examine the facts about Great Danes and make an informed decision.

Great Dane dog history first appears about 3000BC. We see Dane like dogs in carvings on Egyptian monuments built around this time. Fast forward 3400 years to the 5th century, when present day Europe was invaded by the Alanis, an Asiatic race, who brought giant mastiff dogs with them. Over the next several hundred years, it is surmized that these mastiff like dogs were cross bred with Irish Grey Hounds, producing a giant but slimmer breed than pure mastiff.

It is also possible that these large mastiff dogs were brought to Europe by the Romans. Over several hundred years the Celts cross bred these giants with either grey hound or Irish wolf hound (or perhaps both). This effort led to the development of the "English Dogge", which some would say is the ancestor to the Modern Great Dane.

It is probably true that both versions of Great Dane history are accurate and contributed to the beautiful animals we now enjoy, but certainly, the Germans deserve most of the credit for the development of the breed as we know it today. By the 16th century, these giant dogs were fairly common as boar hounds in both Britain and the Germanic states. The Germans did import a large number of these "Englishe dogges" for cross breeding with their own version as they worked to develop the perfect boar hunter for their own needs.

But here the history of the great dane takes another twist. Boar hounds were not cudly stoic dogs.European wild boar were very dangerous and hunting them required a fast, strong and aggressive dog. And that's what had been developed. But it was also realized, that a dog of this size could be an excellent guard dog - although in order to fulfill this function something would have to be done to make it more people friendly. And so over the 18th and 19th centuries, German dog breeders concentrated on evolving their boar hound into a breed of good temperment and friendliness.

The Germans continued to document and develop the breed and in 1880 breeders and dog judges (dog shows and dogs were huge in Germany then as now) met and agreed that this German breed was now distinctly different from the English mastiffs and formally declared the "Deutsche doggen".

In 1891, the Great Dane Club of Germany was formed (still called Deutsche doggen or German Dog club) and the modern day standard was adopted. Eight years later, the Great Dane club of America was founded in Chicago and the Dane was officially recognized in North America.

So why is a dog breed that has never had anything to do with Denmark named a Great Dane?

Another little twist in Great Dane history. In the early 1700's, a French naturalist, Compte de Buffon first saw these dogs while traveling in Denmark. He labelled this breed "le Grande Denois" or Great Dane. For some reason, the name stuck - although only in English. (The Germans continued to refer to this breed as the "Deutsche doggen".) So, although Denmark has absolutely no part to play in the story of the history of Great Danes, the dog is nevertheless tied to it albeit in name only.